In the end I couldn't reliably print PLA with the original E3D V4 Hotend, Sanjay from E3D was nice enough to send me a complete replacement, plus some extras.
I spent 3 or 4 days printing PLA with the new hotend, and while I can get good results from it, I don't think it's an ideal solution for printing PLA.

First I want to sow you how good a print the hot end can produce, this print is in Ultimachine Natural ABS 0.2mm layer height, the model is scaled by 50 %.
I doesn't photograph particularly well, but looks really good, it's hard to find something to criticize about the print. Perhaps the best way to describe prints from the E3D Hotend is "sharp", it does a great job of with detail, as good or better than any Hotend I've used.

The following is the small army of buddhas that are my attempts to get a really good PLA print out of the Hotend.

This army does not include the many complete failures I had early on, any attempt with too aggressive a retraction setting (anything over 2mm on my boden setup) resulted in a print failure with the Hotend jamming. Any attempt to print under ~225C resulted in a jam and failure.
The really observant of you will have noticed that although most of the prints are actually very good they all have issues when printing the head. The forwards most print is perhaps the best of them, so lets take a closer look. 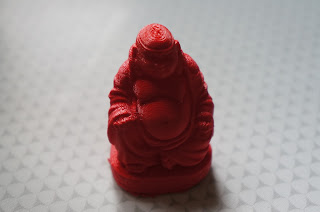 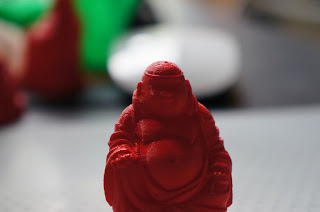 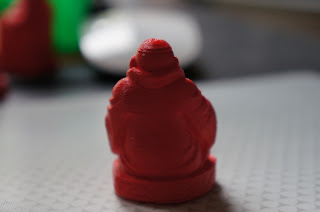 It's somewhat hard to see, but if you look closely what happened in the print, is that at the start of a layer the flow of plastic did not immediately resume. Very shortly afterwards when it did resume, the pressure that had built up during the "stall" caused excess plastic to be extruded part way into the layer, producing the distinct ring on the forehead.
What you can't see without watching the print is why this happens, there are two very distinct places when printing the model where the cooling settings cause the print head to greatly slow down, one is at the top of the coat and one at the point you can see the issue. Some of the models have similar issues at the first point.
What I believe happens is that the retracted filament sticks to the inside of the stainless thermal break when it's primed, and the low extrusion rate isn't enough to overcome this additional force. The pressure slowly builds during the layer and when extrusion resumes you get all the excess plastic deposited very quickly.
My reason for believing this is that you can see it happen when the hotend is blocked, it simply will not extrude, the stepper will stall trying to drive more filament in, you wait perhaps 30s or retract 30mm of filament, and suddenly you see a lot of very liquid filament spew out and the Jam is cleared.
You appear to be able to reduce this effect by increasing the temperature of the print, but I don't have enough cooling to print PLA at much more than 235C (where this print was done) without it introducing other issues.

Now this particular model is particularly challenging at this scale, and I have printed several other PLA pieces that look very good, but there are plenty of none all metal Hotends that will also print this model without the issue.

My conclusion is if you don't print a lot of PLA then this Hotend is really very good, and well worth the investment, the fact that E3D have been responsive in dealing with problems is a big plus as well.
If you primarily print PLA I'd wouldn't by any all metal Hotend right now with the intent of using it as your primary Hotend.
I'm beginning to think that there is no perfect single hotend and the right approach is to have at least 2 and make it fast and painless to swap between them, which I suppose gets back to my 3D printer automatic tool changer idea...