I did some printing with Nylon a few months ago, I was running my hotend at ~245C for a lot of it which is getting close to the point where both the PEEK and the PTFE liner would be damaged. In fact when I stripped the hotend down to change the nozzle I did see signs of damage to the PTFE liner.

Several all metal hotends using a stainless steel thermal break have started to appear on the market, and I ordered the E3D one when they went up for sale.
This is what's in the package. 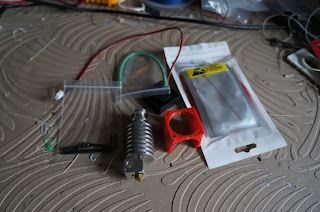 It's pretty much everything you need to build it, including the alan keys for the set screw and the bolts to mount the fan. E3D has assembly instructions on it's website, they are straight forwards and following the yields something like this.

The purple part is a mount designed for a JHead from http://www.thingiverse.com/thing:60539
Since I was replacing the hotend anyway I took the opportunity to add some inline connectors to make removing it easier.
Here it is mounted on the Rostock Max

Some observations, without the fan the heatsink gets very hot, with it, it's cool to the touch even close to the thermal barrier.
I pushed some filament through by and it's somewhat interesting, there is some initial resistance, but one the filament is moving that seems to clear, more on this in a bit.
I plugged everything in, reset the Z Height on Max, I ended up losing about 12mm of Z, though that could be regained with bigger spacers.
I started a print using PLA and the hot end immediately jammed, after some messing about I did get the print started and it worked well until it jammed part way through the print.
After some experimentation I think the issue is that I ended up mounting the fan perhaps 10mm higher than the supplied fan mount and there is insufficient cooling at the base of the heat sink, this in turn is increasing the length of the melt zone and the PLA is doing what PLA does and jamming.

So I tried a different mounting configuration which allowed me to retain the original fan mount. 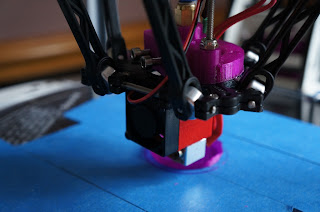 This seems to work better, but I still had a hell of a time getting the first layer down, it would get half way through and jam. In the end I set the temperature MUCH higher than I usually would for PLA, the print above is running at 250C. It doesn't behave like PLA at 250C, usually it has the consistency of water at that temperature.

So I pulled out my thermocouple and stuck it in the spare hole on the aluminum heater block, it reads 245C, so the thermistor isn't far off.  I've been printing the same plastic at 190C in the old hotend.
Best guess is the cooling fan is causing a significant thermal gradient in the AL block and as a result the temperature at the outside of the block is significantly different than the actual temperature of the brass nozzle. Unfortunately the thermocouple won't fit into the hotend itself, so I can't verify. 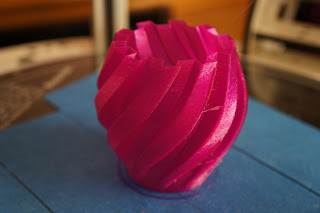 No conclusion at this point, I need to run more PLA through it and see if I can get a handle on how best  to make it work, and obviously run some ABS and Nylon through it.