I've been looking for a good solution to automatic bed leveling, Nophead did some work on this a couple of years ago using a sensor that was deployed during a calibration phase. I've also seen a solution using a metal bed and the hotend itself as a probe.

The idea is simple enough measure 3 points to get the plain of the bed, adjust the incoming GCode to print parallel to it.

The same approach could be taken to auto calibrate a delta printer, though in this case you'd adjust the arm positions to all have the same step value at the same height. It's actually a little more complicated that this because the measurement point would be offset from the center of the head, but it's still relatively simple.

My original idea was similar to Nophead's, have a deployable probe and use a mechanical switch for the measurements, using a system where the head would be moved into a physical obstacle somewhere in the build envelope to deploy/retract the probe.

However a friend of mine pointed me at optical distance switches, used in robotics for obstacle detection. After reading the datasheet, they are really pretty inaccurate, but in this application accuracy is irrelevant, all you need is 3 values relative to each other, so what matters is repeatability. Of course there is no information on that in the data sheet, so I ordered one from Pololu.

I spent most of the weekend writing a TCP stack for the LPC1768 board, but I did get a change to wire up the sensor and do some rough testing.
I attached it temporarily with some tape to me RostockMax's carriage, and jogged to turn the proximity LED on and off. 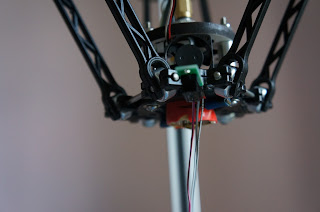 I wasn't expecting much, but it turns out it's remarkably repeatable. I would estimate in the 0.02mm range and certainly better than 0.05mm.
So now I have another project to get back to when I have some time...